On Tuesday, the S&P 500 closed at 1,347, besting its previous bull market high of 1,343 set on February 18th (shown on the chart below). The last two days have seen the market improve upon that, with successively higher closes on Wednesday and Thursday. Stocks are trading higher again today, too, with the S&P currently at 1,364. Considering that there were some high impact events this week with a heavy flow of corporate earnings reports, an important Federal Reserve meeting followed by a first-ever press conference held by the Chairman, and the first quarter GDP report, it has been another impressive display on the part of stock investors. 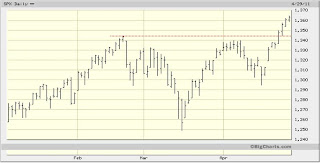 This week’s market action makes it increasingly appear that the sideways pattern of the past two and a half months, which included a -6.5% decline and subsequent rebound, was simply another consolidation in this bull market. All of the angst regarding the Middle East, Japan, and Europe seems to have only been able to muster enough negative energy to cause the market to momentarily pause again, instead of sending stocks spiraling into the abyss as widely feared.

Of course, things can change quickly, so we have to remain on our toes. Next week investors are sure to be bombarded by reminders that it’s time to “sell in May and go away” simply because the calendar has changed, which might create a new round of jitters. But our base case at the moment (subject to change based on incoming evidence) is that the S&P should ultimately be able to carry somewhere above 1,400 before the bull pulls in its horns for good.

Carl joined Pinnacle in 2001 after graduating with honors with a Bachelor of Science degree in Finance from the University of Maryland. In his role as Senior Investment Analyst, he is involved in a variety of different research and analysis efforts, ranging from broad macro-economic topics to individual security selection issues, across different asset classes and markets. He helped develop Pinnacle’s Tactical Asset Allocation investment strategy from its beginnings in 2002, and remains actively involved in its ongoing execution. He is an integral part of Pinnacle’s Investment Team, which handles the day-to-day portfolio management activities. Carl is a CFA charterholder.

We are using cookies to give you the best experience on our website. Cookie information is stored in your browser and performs functions such as helping our team understand which sections of the site you find most interesting and useful.

This website uses cookies so that we can provide you with the best user experience possible. Cookie information is stored in your browser and performs functions such as recognising you when you return to our website and helping our team to understand which sections of the website you find most interesting and useful.

Strictly Necessary Cookie should be enabled at all times so that we can save your preferences for cookie settings.

If you disable this cookie, we will not be able to save your preferences. This means that every time you visit this website you will need to enable or disable cookies again.